Semi autotrophic hydroponic systems for crop multiplication were first developed for potatoes but have been adapted for cassava. The SAH technique is carried out in a laboratory and screen house, and involves placing modified soil, plant roots and little water in trays; which allows moisture to be transported while keeping the top of soil relatively dry. In SAH systems roots are encouraged to grow down, and the dry soil on top discourages damp-off and other diseases caused by excess moisture. Infrastructure requirements and costs of production for SAH are comparatively low, which makes that the technique can be easily implemented across dispersed farming communities in Africa. Because SAH plantlets have well-developed shoots and roots there much less need for replacement after planting in the field as in the case of cassava stem cuttings. The SAH technology allows to produce materials that are entirely free of pests and diseases unlike traditional cassava stem cuttings methods, which translated into higher resistance when planted in open field. Small-sized facilities for SAH propagation of cassava that have been set up in Africa are able to produce 7 million plantlets per year, simultaneously for multiple cassava varieties.

The SAH technology is suitable for rapid dispersal of improved cassava varieties in all major growing areas in Africa as it makes use of simple facilities and requires limited capital investments. Commercial biotechnology companies and community-based organizations can implement the SAH technique for propagating disease-free and high-quality cassava planting materials close to the fields where farmers cultivate the crop. This allows seed suppliers to bring early generation planting materials within reach for remote rural communities that rely on cassava for food and income. Planting materials that are produced using the SAH technique have a greater resistance to pathogens in open fields than those obtained from stem cuttings, and thus presents a viable strategy for combatting infestations and increasing yields in cropping systems across Africa. Also, with the production of disease-free SAH plants, transfers of planting materials between countries becomes much easier.

The required amenities for SAH multiplication of cassava include basic growth chambers or screen houses sealed off with nets with climate control systems, in which shelves are placed to hold trays with modified soils for plants to emerge. High-quality media are added to soils such as peat, rockwool, vermiculite and perlite that provide anchorage and plant support, hold up plant nutrients and water, and allow air gas exchange between the roots and the atmosphere.

At the start of the SAH process, tissue cultured (in vitro) plantlets are produced under semi-hydroponic and semi-controlled environmental conditions, which are then cut into mother plants that are transferred into trays with growth media and placed in the growth chamber. After 2-3 weeks the mother plant are recut making two plantlets from one, which are then put back into the growth chamber for 6-8 weeks to develop rooted plants. Trays can transported in perforated cardboard boxes for over 48 hours, after which these can directly be planted in open fields for production or screen house for breeding.

Startup Requirements
1) Inform farmers and multipliers about the benefits of the SAH technology for multiplying cassava planting material, 2) Obtain seeds or in-vitro mother plants from improved cassava varieties that are free of pathogens, 3) Construct growth chamber or screen house and procure shelves and growth media for propagation, and 4) Organize marketing and delivery of SAH plantlets through existing suppliers in the cassava seed system.
Production Costs
A SAH facility with an area of 40 square meters, which can produce 50,000 SAH plantlets per month (sufficient for cultivating 16 hectare of land), has an estimated setup cost of up to USD 10,000. Operational cost for the production of 75,000 plantlets through the SAH technology is amounting to USD 3408 or 0.05 USD per piece. These prices go down if larger volume of plants are ordered. Costs are furthermore incurred for shipment and handling of the plantlets to farmers or shops.
Customer Segmentation
Commercial and community-based multipliers of cassava, Biotechnology companies
Potential Profitability
At an output of 3 million cassava plantlets a company is able to sell one SAH propagated plantlet at USD 0.12. SAH allows multipliers to supply large number of cassava plants in a shorter time than tissue culture methods at a price that is seven times less, which makes that more farmers are able to afford high-quality planting materials. Farmers who cultivate cassava that is multiplied through the SAH technology will save on cost and labor for replacement planting in the field, and increase harvested yields, even in areas with high pest and disease pressure.
Licensing Requirements
Propagation of cassava through SAH and marketing to farmers has to fulfil national phytosanitory regulations and multipliers need a license for setting up SAH activities.
Innovation as Public Good
SAH technology for cassava is a public good that is developed and disseminated in Africa by the International Institute of Tropical Agriculture. 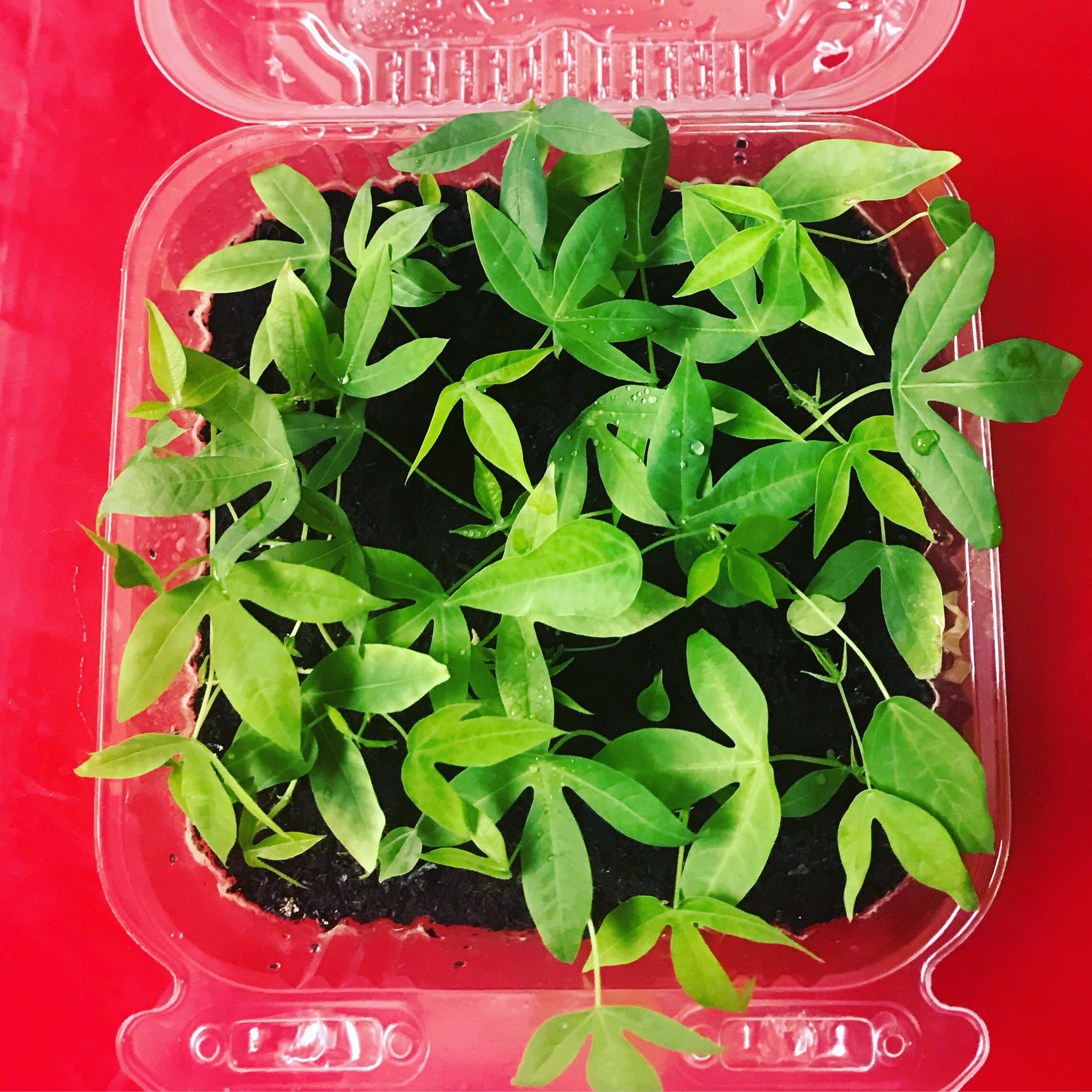 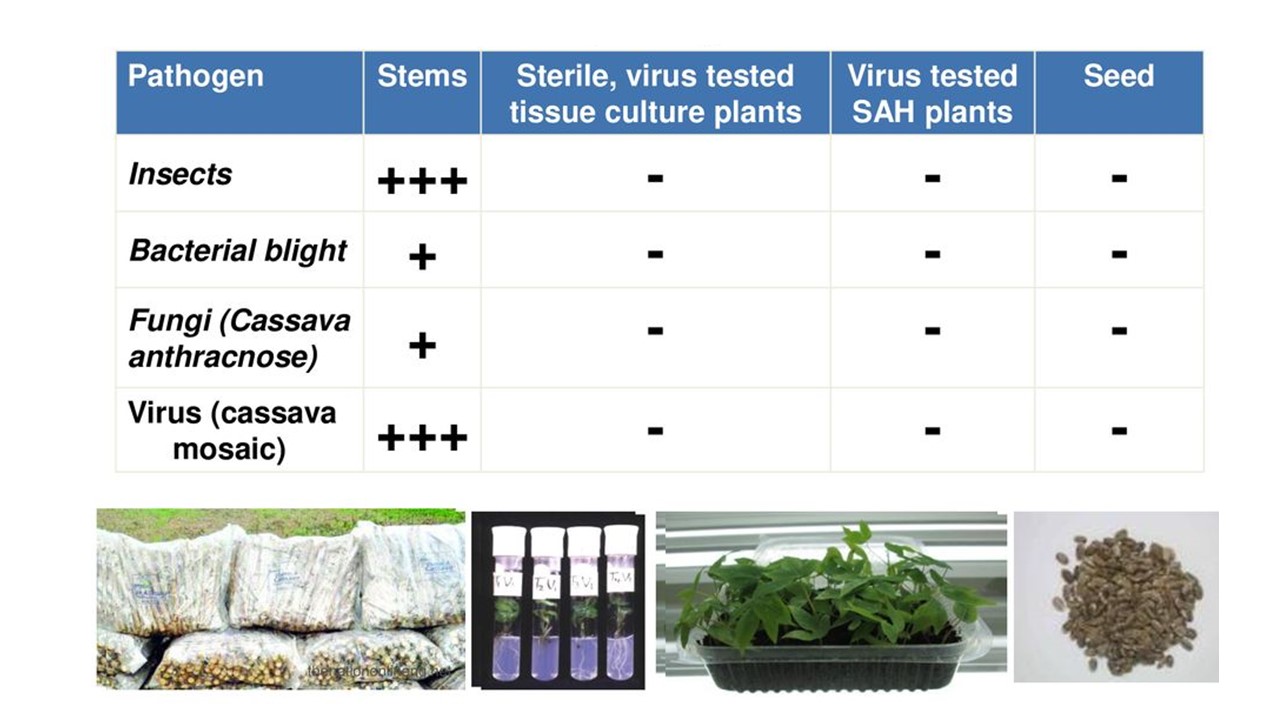 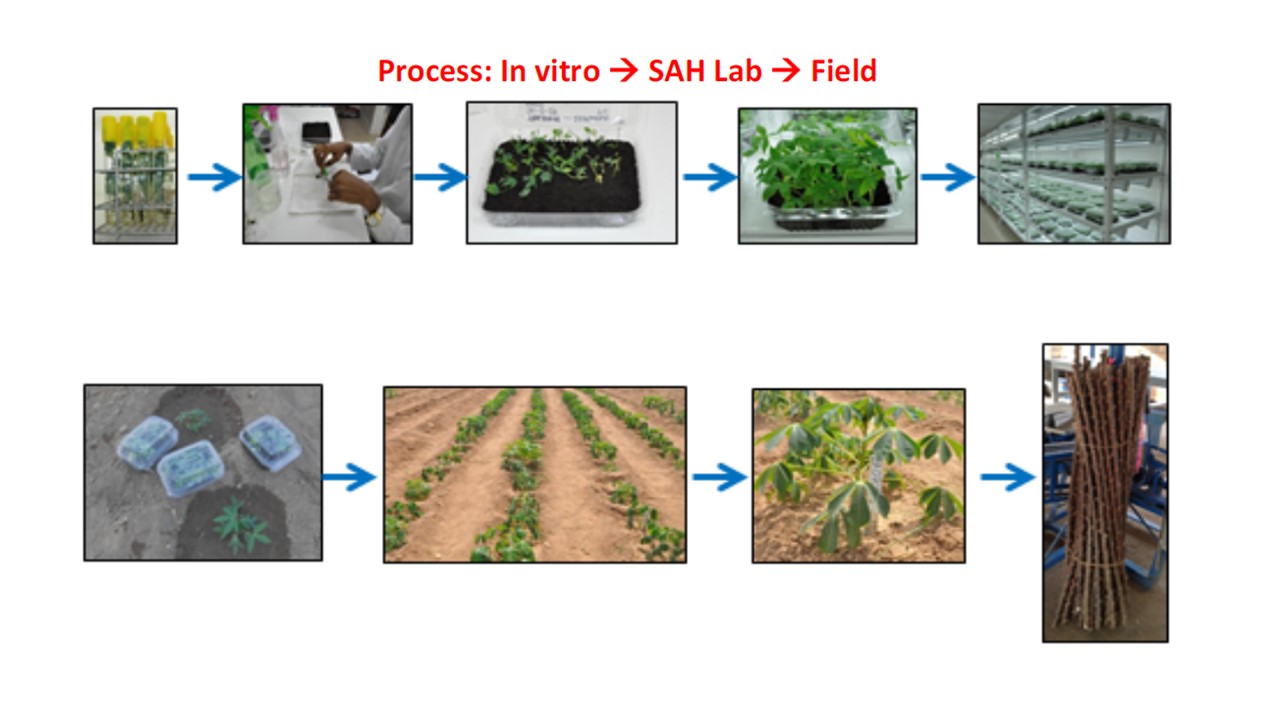 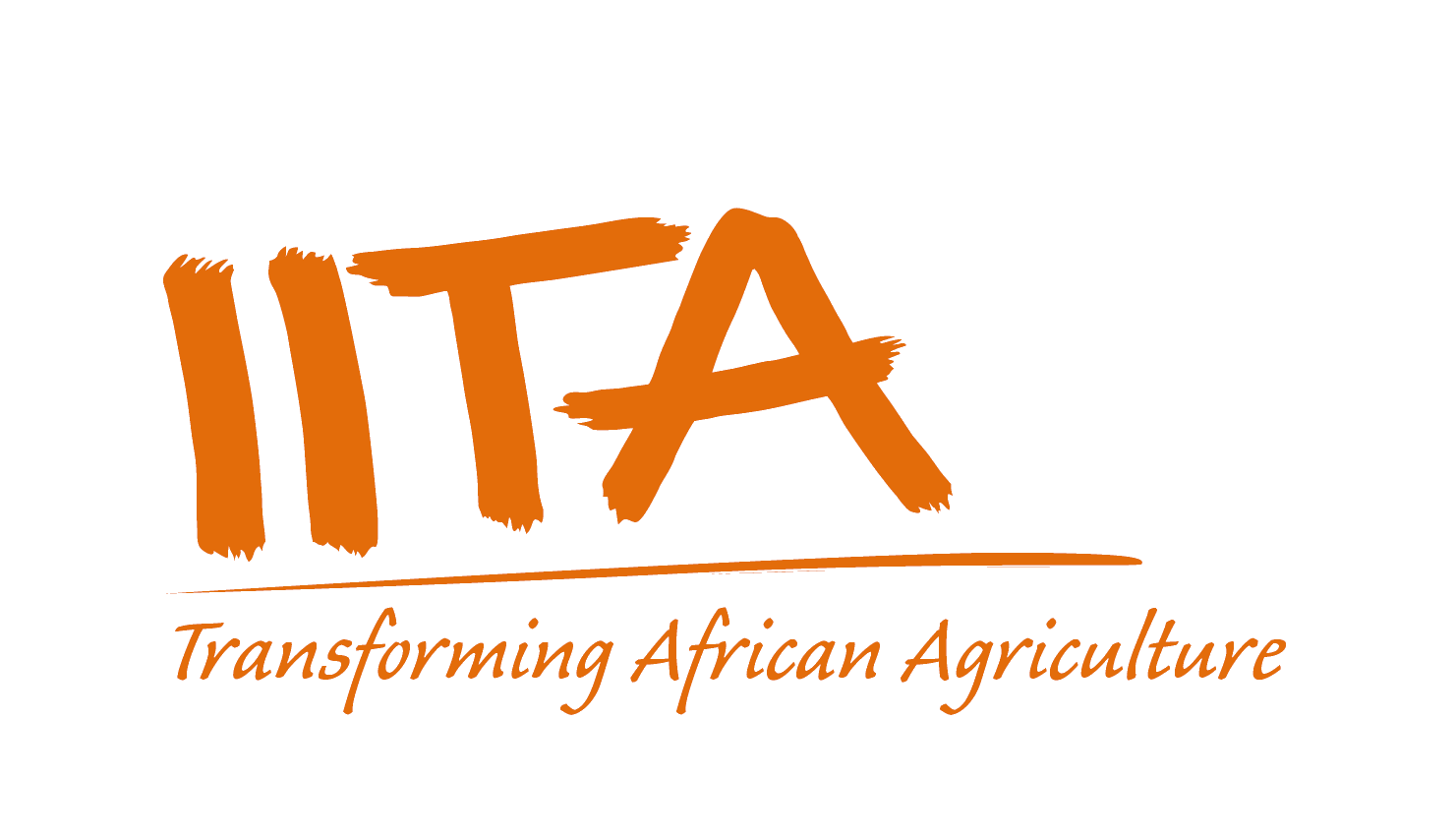