Common bean is an inexpensive source of protein, minerals and vitamins, and is important for food and nutritional security in smallholder farming systems in Africa. Many small-scale farmers in bean growing areas allocate scarce resources in their production in marginal lands with low soil nutrients especially nitrogen (N). Because of these limitations coupled with climate related stresses and attacks by pests and diseases, bean yields in developing countries remain low despite the growing demand. Sustaining the growing Africa’s demand for beans therefore requires a substantial increase in yield from existing croplands considering expansion to new arable lands is no longer feasible in high populated regions. In line, promotion and adoption of the climbing bean technology serves to cope with the problem of land degradation and land scarcity in high bean demand area thereby reducing poverty and ensuring food insecurity. Improved varieties of climbing bean that are in addition more resistant to pests and diseases, tolerant to abiotic stresses and high yielding have been developed and released in several countries in Eastern and Southern Africa. Breeding improvement and selection for higher N fixation in climbing bean and their subsequent adoption serves not only as a low cost strategy to maintain productivity but also contributes to the possibility to successfully grow the crop in soils with limited nitrogen.

Though known to utilize atmosphere N to cater for their N requirement through Symbiotic Nitrogen Fixation (SNF), common beans are generally regarded as poor N fixer due to their low SNF capability as compared to other legumes such as soybean and cowpea. Common bean is thought to fix small amounts of atmospheric N and this has been attributed to their failure to establish effective nodulation, their genetic symbiotic inefficiency and the short vegetative fixation period. However, research indicates considerable genetic variability for total nitrogen fixation and traits associated with fixation. As such, several climbing bean genotypes have been reported to exhibit higher SNF ability than bush beans, with a mean % N derived from the atmosphere (%Ndfa) value of 60% which is greater than reported bush bean values (≤40%). This has led to breeders and soil ecologists paying more attention to breeding and selecting legumes for N-fixation in tandem with compatible Rhizobium strain selection. Climbing bean varieties with high nitrogen fixation potential (fixing >60% of their nitrogen from the atmosphere.) are capable of fixing enough atmospheric N to support equal or greater seed yields as compared to other high-yielding, conventionally bred bean varieties.

Climbing beans provide the best option for intensification and the production of surplus beans where arable landholdings are diminished and to meet the growing demand for beans. Climbing beans are potentially high yielding, capable of giving two to four times the yield of bush varieties. Different varieties are suitable for major production zones in African countries and achieve similar yields as other conventional improved lines under a range of soil and weather conditions. For instance, the development of medium and low altitude varieties designed to be early maturing and more heat tolerant has increased bean production in semi-arid areas. Climbing beans are better grown as sole crops since they grow too fast and tall smothering the intercrops such as maize. Nevertheless, they can be grown under multiple cropping systems, mainly in association with maize, banana, roots and tubers, sorghum or millet. However, best yields of climbing bean are achieved through a combination of practices: the use of improved varieties, seed inoculation with rhizobia, basal application of specialized fertilizers and organic fertilizers, row planting, sole cropping, strong and tall staking, timely planting and proper weeding. Given the heterogeneity of African smallholder farming systems, these practices and their optimal combination (together representing the ‘climbing bean technology’) need to be tailored to fit the local agro-ecological, socio-economic and cultural environment

Climbing bean varieties with higher nitrogen fixation potential possess predominant genes for SNF enabling them establish effective nodulation. Climbing bean varieties with high nitrogen fixing ability (fixing >60% Ndfa) are selected as breeding lines for improvement of other more adapted varieties for higher N fixation. Traits such as percentage of nitrogen derived from atmosphere (%Ndfa)) and biological nitrification inhibition (BNI) have been employed in selecting for high nitrogen fixing potential. Germplasm accessions from especially two sister species, P. coccineus and P. acutifolius, have been utilized as sources of resistance to major production constraints such as drought and high temperature tolerance. Molecular markers are used to select for resistance to key diseases and insect pests. Efforts have been made to utilize modern genomic tools to increase scale, efficiency, accuracy and speed of breeding. Targeted breeding based on agro-ecological adaptation and participatory plant breeding processes have enabled expansion of climbing beans from its traditional high altitude to medium and low altitude areas. Through gender-responsive participatory variety selection, market-demanded varieties have been released in several African countries. A number of development partners participate in the dissemination of these improved climbing bean varieties such as International Center for Tropical Agriculture (CIAT) through the Pan African Bean Research Alliance (PABRA).

Climbing beans must be grown on some kind of trellis (stakes). Climbing bean is planted in pure stands or as an intercrop. Whether a farmer plants one or two bean crops per year is determined largely by rainfall patterns. In tropical regions having a bimodal pattern representing two seasons, two plantings per year are possible, but in climates such as Southern Africa with a single rainy season, only one crop is planted. Planting densities vary widely depending on local practice and degree of mechanization. Normally, where mechanized cultivation is practiced, row planting is common, using inter-row distances of 75-90 cm. Prior to planting, a specialized legume fertilizer is applied into the soil along the planting lines and the seeds inoculated with rhizobial inoculant. Sowing is then done on moist soils. At around 40 days after planting, staking is done to support the bean plant. There are several ways of staking or constructing trellis including single sticks, wigwam, tent, single row and live trellis. The type of construction is mainly dependent on availability of staking materials as well as investment capability of the farmer. The trellis should not be higher than 2 meters in order to make picking easier. When the beans reach the top of the trellis, the growing point of the main shoots should be pinched out. This reduces height and increases the growth of lateral shoots.

Startup Requirements
Entering into climbing bean production simply requires that local varieties including bush types be substituted by producers. Given the heterogeneity of farming systems, climbing bean technology need to be tailored to fit the local agro-ecological, socio-economic and cultural environment. In terms of scaling this innovation there are several steps: 1) Promote the benefits and availability of improved climbing beans within bean production areas, 2) Community-based and commercial suppliers of bean seed should be provided with the best varieties as a product line, 3) Climbing beans producers must be linked to buyers and food processors to create market opportunity, and consumer and nutrition groups should assist in creating further demand, and 4) Financial incentives that support local suppliers of climbing bean varieties should be devised that include extending purchase opportunity to bean producers, allowing them to incorporate these varieties into their production systems.
Production Costs
Development of climbing bean varieties initially involved advanced breeding techniques that required significant investment from the public sector and donors, but this cost should not be passed to commercial applications because the resulting elite varieties are considered Regional Public Goods. Commercialization of these varieties from the public sector technology holders to seed companies and farmers is largely conducted on a cost recovery basis. Climbing beans production is labour intensive and requires substantial investment since they need stakes to realize their climbing potential, implying additional costs for materials and labour. Moreover, because of their larger biomass production, climbing beans require more nutrient inputs and better management. Although, adopting climbing bean offers a potential for increasing bean production in Africa, is not a simple replacement of bush beans.
Customer Segmentation
Climbing bean has a highly segmented customer base including small-scale and commercial producers, seed companies and food processors. Seed access and collective marketing are needed to expand climbing bean cultivation.
Potential Profitability
Growing more climbing beans, as opposed to lower-yield bush beans, could help increase food security in sub-Saharan Africa as demand for food increases, climate change becomes more pronounced, and arable land becomes scarcer. Climbing beans generally improved food self-sufficiency and income, but often required increased financial investment and always demanded more labour than current farm configurations. An impact assessment of climbing bean adoption in Rwanda demonstrated that each additional kilogram of climbing bean seed planted raised per capita consumption expenditure by 0.9% and bean consumption by 2.8% (1.5 kg per person per agricultural season). This translates into an additional 117,480 tons of bean consumed by 4.4 million people in the country each year. Adoption of climbing bean also increased the probability of household food security by 0.6% while decreasing the likelihood of being poor by 0.6%, which translates to 4,714 households lifted out of poverty per year.
Licensing Requirements
Varieties of climbing bean are marketed under a commercial license though seed bulking and sales by farmers is commonly practiced, but certification is often required following respective national compliance with seed system requirements.
Innovation as Public Good
Climbing bean varieties with higher nitrogen fixation potential represent a very important Regional Public Good and the International Center for Tropical Agriculture in collaboration with other partners share responsibility for promoting them through national programs and within the larger agricultural transformation process. 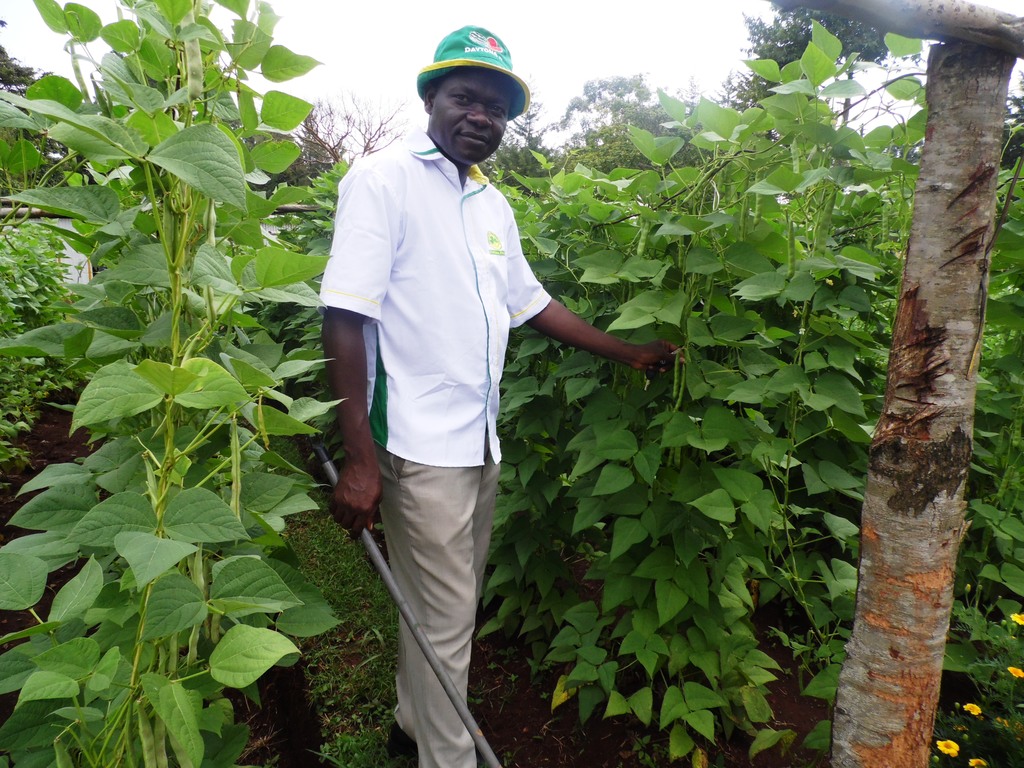