Despite efforts to curb iron deficiency through supplements and fortified foods, it remains a leading nutritional ailment in developing countries, affecting an estimated 2 billion people worldwide. Iron deficiency is associated with anemia and insufficient supply of oxygen to the body. This is particularly acute due to inadequate dietary intake of bio-available iron, particularly during pregnancy and infancy or as a result of blood loss due to parasites or infection. The development of High-Iron Bean (HIB) represents a strategy for alleviating this situation. Considering that common bean is one of the most widely consumed legumes in eastern and southern Africa and is a major source of protein, zinc and iron, it is envisioned that HIB will greatly enhance nutrition and food security. Note that per capita bean consumption in Eastern Africa is among the highest in the world with consumption levels ranging between 50–60 kg per person per year. Under this situation, HIB is rapidly evolving from subsistence food to a modern, market-oriented crop with major impacts on household food and nutritional security, and as an important source of income within small-scale mixed farming systems.

Biofortification of bean aims at increasing iron levels during plant growth rather than through post-harvest processing, an approach that serves as a way to reach populations where supplemental fortification activities among poorer households may be difficult to achieve. Biofortified iron-rich beans were developed through crossbreeding of native American beans conserved in the CIAT genebank that are naturally higher in iron in order to better adapt them to tropical growing conditions. Although increased concentrations of both iron and zinc are the breeding objectives, most effort was devoted to iron that responded more rapidly to selection efforts. Selective breeding was also done to ensure good yields and a grain color preferred by consumers, including tolerance to intermittent drought and diseases. In addition, ensuring that these HIB varieties also meet consumer preferences in terms of bean size, taste, colour and cooking characteristics is an important part of this process. Many farmers in developing countries treat beans as a low-input crop, choosing to allocate scarce resources to other crops, particularly cereals, and to grow beans as an understory intercrop. Because of these limitation coupled by the declining soil fertility, bean yields in developing countries remain low.

Most HIB are used for home consumption, but in some African countries such as Rwanda, a modest market is developing for high iron precooked beans and in Burundi a composite flour including HIB is being produced. The bean value chain presents great opportunities for meeting the food and nutrition needs of the thousands of rural and urban households in the Africa. Beans are typically planted on level land, but sowing on hills or ridges may be practiced in areas with heavy soils or where the water table is high. Varieties of HIB are now available for a wide range of growing areas in sub-Saharan African and can be adapted to the conditions within a wide range of production systems and agro-ecologies. The recent past has seen the release iron-rich beans in Rwanda, Burundi, DR Congo, Kenya, Malawi, Tanzania, Uganda, and Zimbabwe among others. High iron was first attained in climbing beans that were released as varieties in Rwanda, Uganda and the Democratic Republic of Congo, and later Colombia. These are represented by lines such as NUV 119 and BIO 102. In the Mesoamerican gene pool, breeding objectives have sought to combine high iron with tolerance to drought and/or resistance to virus (BGYMV in Central America, BCMNV in East Africa).

. HIB are conventionally bred varieties with relatively higher iron levels than other conventional varieties. These varieties provide about 44 mg per kg iron above the conventional varieties allowing for 30% of average daily iron requirement to be met by simply switching from conventional to HIB varieties. This assumes 7% bioavailability, 90% retention after cooking, and consumption of 200 grams per day for adults and 100 grams per day for children. Selection focused on lines with well filled pods, high yields, adapted to prevailing environmental stresses and high iron contents. While iron levels may vary over environments, ranking of genotypes is normally very similar.

Common bean is planted in pure stands or/and intercropped with maize, sweet potatoes, cotton, coffee and other crops. Whether a farmer plants one or two bean crops per year is determined largely by rainfall patterns. In tropical regions having a bimodal pattern representing two seasons, two plantings per year are possible, but in climates with a single rainy season, only one crop is planted. HIB varieties are multiplied and cultivated in the same way as any other bean variety, in that seeds are sown in rows, with seed rates being high in pure stands depending on the bean type (climbing or bush type). When intercropped, beans are sown at a lower rate. Even within the variety, planting densities vary widely depending on local practice and degree of mechanization. Normally, where mechanized cultivation is practiced, row planting is common, using inter-row distances of 75-90 cm, depending on the variety. More widely spaced rows facilitate cultivation, while planting more closely spaced rows results in more numerous pods and higher yields, however, close spacing can increase disease problems. Soil preparation includes cultivation and the application of any needed fertilizers including seed inoculation with rhizobia and supplemental basal fertilizer. Because of their high nutritional value, HIB varieties are perfectly suited for manufacturing of flour or processed foods, such as canned pre-cooked beans, which can be retailed on local and international markets

Startup Requirements
Entering into HIB production simply requires that local varieties be substituted by producers for biofortified (iron) varieties. In terms of scaling this innovation there are several steps: 1) Promote the benefits and availability of HIB within bean production areas, 2) Community-based and commercial suppliers of bean seed should be provided with the best HIB varieties as a product line, 3) HIB producers must be linked to buyers and food processors to create market opportunity, and consumer and nutrition groups should assist in creating further demand, and 4) Financial incentives that support local producers of HIB varieties should be devised that include extending purchase opportunity to bean producers, allowing them to incorporate these biofortified varieties into their production systems.
Production Costs
Development of HIB varieties initially involved advanced breeding techniques in the laboratory and greenhouse, and extensive testing in the field. This effort required significant investment from the public sector and donors, but this cost should not be passed to commercial applications because the resulting improved varieties are considered Regional Public Goods. Providing these varieties from the public sector technology holders to commercial interests and farmers is largely conducted on a cost recovery basis. The costs associated with producing lines with high Iron and Zinc levels are not substantially different from more common improved bean varieties, and the costs of seeds are similar. However, producers must recognize that HIB is not a stand-alone technology and they must co-invest in fertilizer inputs and other recommended crop management and post-harvest practices in order for HIB to result in effective and sustainable increases of nutrition and income.
Customer Segmentation
HIB has a highly segmented customer base including small-scale and commercial producers, seed companies, and food processors but the biofortication aspect with Iron serves to refocus its use among nutritionally vulnerable households.
Potential Profitability
“Biofortified-iron” bean is a profitable commodity with high returns relative to cereal crops such as maize and can be used to diversify cereal-based systems. There are many opportunities for developing agribusiness along the bean value chain from production, distribution, trade, processing, and consumption. For example, in Rwanda, the cumulative added value of iron beans during 2010–2018 was estimated to be just under $25 million due to higher bean productivity and the approximately 5,000 disability-adjusted life years (DALY) saved1 from reduced risk of iron deficiency as a result of improved diets. By 2025, the value of benefits from iron beans to Rwanda is expected to exceed US $100 million. HIB varieties are in addition more resistant to pests and diseases, tolerant to abiotic stresses, early maturing and high yielding as compared to traditional varieties.
Licensing Requirements
Varieties of HIB are marketed under a commercial license and certification is often required following national compliance with seed system requirements.
Innovation as Public Good
HIB varieties represent a very important Regional Public Good and the International Center for Tropical Agriculture (CIAT) in collaboration with harvestplus and local partners share responsibility for promoting them through national programs and within the larger agricultural transformation process. 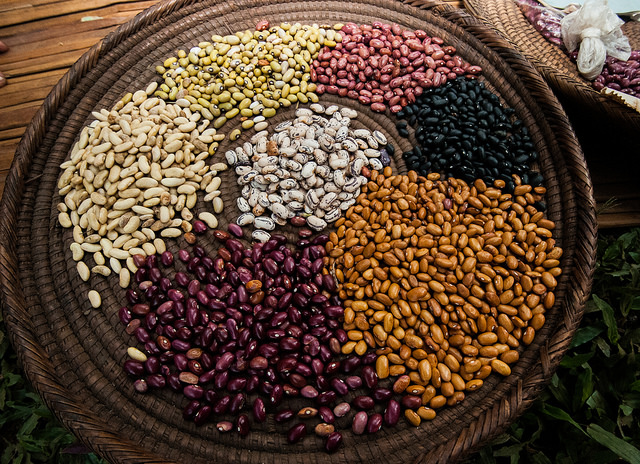 All farmers Agro-manufacturers Agro-dealers Other beneficiaries