A range of improved orange-fleshed sweet potato (OFSP) varieties have been developed for African farming systems that possess locally important traits such as increased beta-carotene and iron content, virus and drought resistance, vine survival, high dry matter, low sugar, salinity tolerance, weevil resistance or avoidance, and early maturity. OFSP allows to improve the nutritional security of communities by enhancing intake of provitamin A, and increasing productivity and resilience. Transitioning to orange-fleshed varieties is uncomplicated and highly acceptable to women, men and children because sweet potato is a key staple for many people in Africa. OFSP can also be used for mixing into animal fodder which enhances their protein content and quality. Planting materials for improved OFSP varieties are available in all countries.

Sweet potato cultivars with orange flesh have more beta-carotene than those with light-colored flesh cultivars. After eating OFSP the beta-carotene is converted into vitamin A whereby providing essential nutrition and supplementing the diet of people. The nutritional value of OFSP varieties is among the highest for starchy staple foods. Surveys have shown that children and adults eating beta-carotene enriched sweet potatoes suffer less vitamin A deficiency, which is one of the most pernicious forms of malnourishment and hidden hunger. Improved varieties of OFSP are early-maturing and achieve high tuber yields, producing on average 25 ton per hectare as compared to non-improved farmer's varieties that get a tuber yield 3 - 7 ton per hectare.

OFSP tubers can be consumed after cooking, or milled into flour or mashed into puree for use in a range of products including breads, chapatis, cakes, juices, porridge etc. OFSP can substitute wheat-based products and is gluten-free. Peels and tubers can also be made into feed meal for animal rearing, as well as for starch extraction. Suitable varieties of OFSP are available for all major growing areas in Sub-Saharan Africa that are ready to be scaled for addressing malnutrition and increasing producer's profits margins.

Improved OFSP varieties contain high levels of beta-carotene, also called provitamin A carotenoid, and gives an orange color to the tuber. The beta-carotene inside tubers is largely retained when processed, making it perfect for manufacturing healthy foods for consumers in the region.

Orange-fleshed sweet potato are propagated from seeds, tubers or vines. Cuttings from vines are most commonly used for planting and easy to make yourself. Slips from tubers or cuttings from vines are nursed by planting them in beds or placing the bottom of the stem in water. The healthy slips or cuttings are planted by inserting these at an angle in the soil, using a spacing of 50cm between rows and 30cm from plant to plant.

Startup Requirements
1) Awareness-raising with farmers and food processors about the nutritional benefits of orange-fleshed sweet potato over non-fortified types, 2) Acquisition of improved OFSP varieties, and 3) Training on propagation of healthy planting material and crop management
Production Costs
In Kenya, a bag with 10 kilogram of OFSP vines are usually sold for less than USD20, including transport costs. For planting a field measuring one acre (0.3 hectare) you need 20 bags of vines, making a total cost of USD400.
Customer Segmentation
Sweet potato farmers, Sweet potato seed multipliers, Agri-food processors
Potential Profitability
There is a high demand for orange-fleshed sweet potato on local and regional markets for fresh consumption or processing into chips, puree or flour that is further sold to bakeries and other food manufacturers. In Rwanda OSFP tubers are sold at 25% premium over white and yellow fleshed sweet potato. Leftover vines and low-grade tubers from sweet potato can be turn into silage that is providing a nutritious fodder for all types of ruminant livestock and pigs to supplement grass-based diets throughout the year. In general, for every dollar invested in enhanced nutrition there is a return of US$ 30 owing to better health, schooling and productivity. Farmers can earn an income by selling planting material. Surveys in eastern and central Uganda demonstrate a single farmer can earn about US$400 per month from the sale of planting materials and sweet potato products.
Licensing Requirements
No license needed???
Innovation as Public Good
Regional public good, International Potato Center is responsible for breeding. 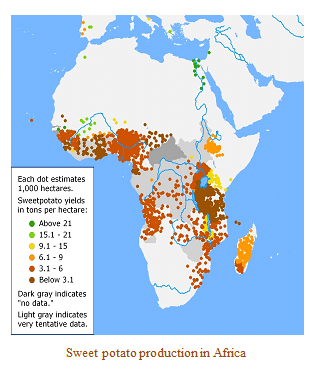