In major wheat production zones of Sub-Saharan Africa yellow rust and stem rust are counting as one of the most destructive diseases. Under favorable conditions infections by these fungal pathogens lead to yield losses of 50-90% and may destroy wheat crops entirely within a weeks. Rust diseases quickly spread as its spores get carried along by winds and allows them to cause devastating epidemics at regional and global scale, like what happened with the highly virulent African strain of stem rust Ug99. Due to the high levels of genetic mutation and sexual recombination taking place in wheat rusts there is a rapid emergence of new strains emerge over time that can be more virulent and damaging. Rusts can infect common grasses and weeds, and produce dormant spores, which act as a reservoir and make it impossible to eradicate the diseases from agricultural landscapes. Use of wheat varieties that are resistant to yellow and stem rust has been very successful in preventing widespread outbreaks and enhancing yields across breadbasket areas in Sub-Saharan African countries. The International Center for Agricultural Research in the Dryland Areas and the International Maize and Wheat Improvement Center together with partners have established expansive networks for developing and multiplying rust resistant lines in major wheat production zones that allow proactive and cost-effective disease control.

Resistance to yellow rust and stem rust in wheat is controlled by specific genes that are expressed at seedling or adult stages of the growing cycle. Seedling resistance originates from a single gene and lasts throughout the entire season, but is often restricted to one particular strain of the pathogen. Adult plant resistance is arising from multiple genes and usually offers protection against multiple rust strains. The seedling and adult plant resistance mechanism, or different genes expressing it, often get combined in one variety as this avoids the rapid emergence of new rust strains. Breeding for rust resistance in wheat is done through conventional methods without genetic modifications; this involves phenotyping varieties to characterize their traits, crossing lines into new cultivars and screening their performance under field conditions. A shuttle breeding approach is used for developing rust resistant wheat, for which varieties are grown under different environments in Mexico and Kenya, allowing to select for multiple desired traits. Further steps like continuous testing of wheat germplasm, speed breeding and use of modern genetic marker technologies for genomic selection are allowing breeders to release improved varieties in a shorter period of time and at lower cost. Generally, resistance to rust by wheat is effective for five years after which a new variety needs to be introduced for keeping the disease at bay.

Yellow rust and stem rust diseases have spread in all major wheat growing zones of Eastern and Southern Africa. Cooler temperatures (<15°C), heavy dew and intermittent rain are creating the ideal conditions for rusts to infect and damage wheat crops which occur in the night-time across highlands and during the winter season of sub-tropical regions. Different variants of yellow rust and stem rust species occur in specific areas of Sub-Saharan Africa owing to climatic conditions, such as is the case for Ug99 (TTKSK) which has been detected in Kenya, Ethiopia, Sudan, Eritrea, Mozambique, Zimbabwe, Tanzania and South Africa. Resistance of wheat varieties is developed for particular sets of rust species making that their use is geographically restricted and has to be aligned with disease occurrence. Adaptations of improved wheat lines to environmental factors like rainfall and growing degree-days further delimit the suitability of their deployment.

Normally, seed multiplication of rust resistant wheat is done after the varieties underwent verification and adaptation trials which takes about one year for farmers to access the new technology. In case of severe outbreaks, it is possible to perform accelerated seed multiplication alongside with field testing of new varieties, this both during main- and off-seasons, allowing farmers to get hold of resistant germplasm in less than a year time from its release. Seed multiplication of rust resistant wheat involves 2-4 stages, and follows the same procedures as for other cultivars. In a first step, early-generation or basic seed is produced by agricultural research centers, and in a second step this is passed on to private farms, farmer cooperative unions, farmer seed producer associations and model farmers for multiplying large volumes of certified seed. Stocks of rust resistant planting material can be maintained by farmers through different in-field techniques, such as the ear-to-row method where best-performing ears are selected and replanted in single lines. Wheat varieties that are resistant to yellow rust and stem rust are grown with the same planting density and mineral fertilizer input as other improved cultivars, following local recommendations. Fungicide spraying may also be needed for resistant wheat varieties to ensure season-long and fail-safe protection of the crop.

Startup Requirements
1) Identify rust resistant varieties through fast-track field testing, 2) Demonstration of rust resistant varieties to popularize with farmers, 3) Establish seed multiplication for accelerated scaling out the technology, and 4) Strengthening the capacity of national systems for disease monitoring, varietal selection and seed distribution.
Production Costs
The stringent selection procedures applied during screening of varieties in nurseries and yield trials is reducing the costs and time for breeding rust resistant wheat varieties. Multiplying seed of rust resistant wheat bears the same costs as susceptible varieties, and labour requirements to produce quality seed are relatively low because the crop is open-pollinating. Total operational costs for farmers in Ethiopia to grow rust resistant wheat have been shown to reach US $440 per hectare, whereas for susceptible varieties it is US $422. This includes the cost of seed for rust resistant at US $37 per hectare, labor costs for land preparation, sowing, fertilizer application, weeding, harvesting, and threshing at US $265 per hectare, costs of fertilizers, pesticide and herbicide at US $101 per hectare, and costs for land and equipment rental, fuel and marketing at US $36 per hectare.
Customer Segmentation
Seed manufacturers and multipliers, Commercial and small-scale wheat growers
Potential Profitability
Controlling yellow rust and stem rust in wheat production through use of genetic resistance is more fail-safe than chemical control with fungicides which offers substantial economic advantages for farmers. Growing wheat that withstands rust diseases reduces or entirely avoids the need for spraying chemical agents, and is thus better for the environment and biodiversity. A study across four wheat growing areas of Ethiopia over 3 seasons found that rust resistant varieties achieved an average grain yield of 4.1 ton/ha whereas susceptible varieties produced only 2.9 ton/ha on average. In another wheat production zone of Ethiopia households adopting rust-resistant varieties have been shown to obtain 351 - 455 kg/ha more wheat yield than non-adopters. The higher grain yields that are realized by rust resistant wheat brings the price of production to US $110 per ton as compared to US $136 per ton for susceptible varieties.
Licensing Requirements
Different standards and procedures for multiplying rust resistant wheat varieties are enforced by licensing schemes and national regulatory authorities which have to be complied with. A technology transfer agreement needs to be signed with breeding centers before private and cooperative enterprises can produce and sell basic and certified seeds from rust resistant wheat varieties.
Innovation as Public Good
Improved lines of wheat that withstand rust diseases are developed and released as Regional Public Goods by the International Center for Agriculture Research in the Dry Areas (ICRARDA) and International Maize and Wheat Improvement Center (CIMMYT), which implies that no royalties have to be paid for seed production. 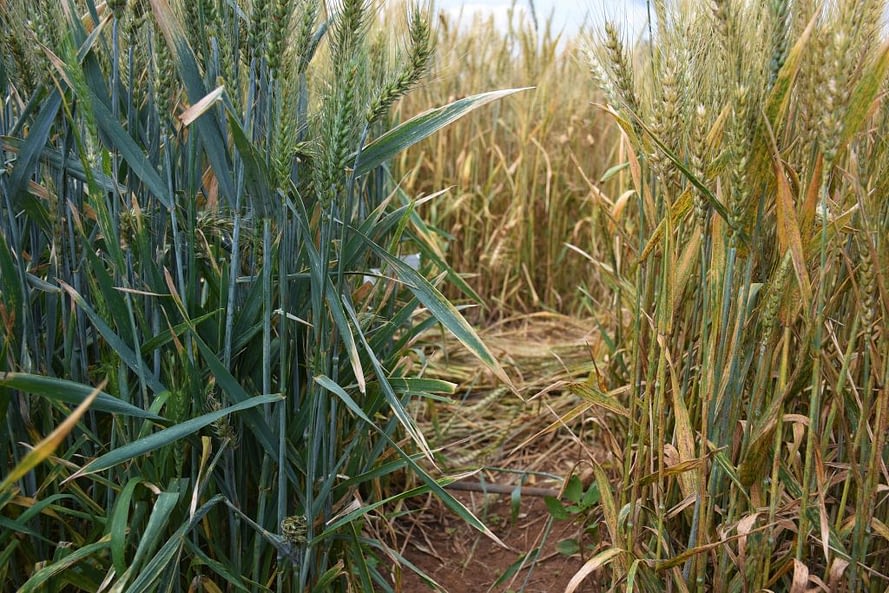 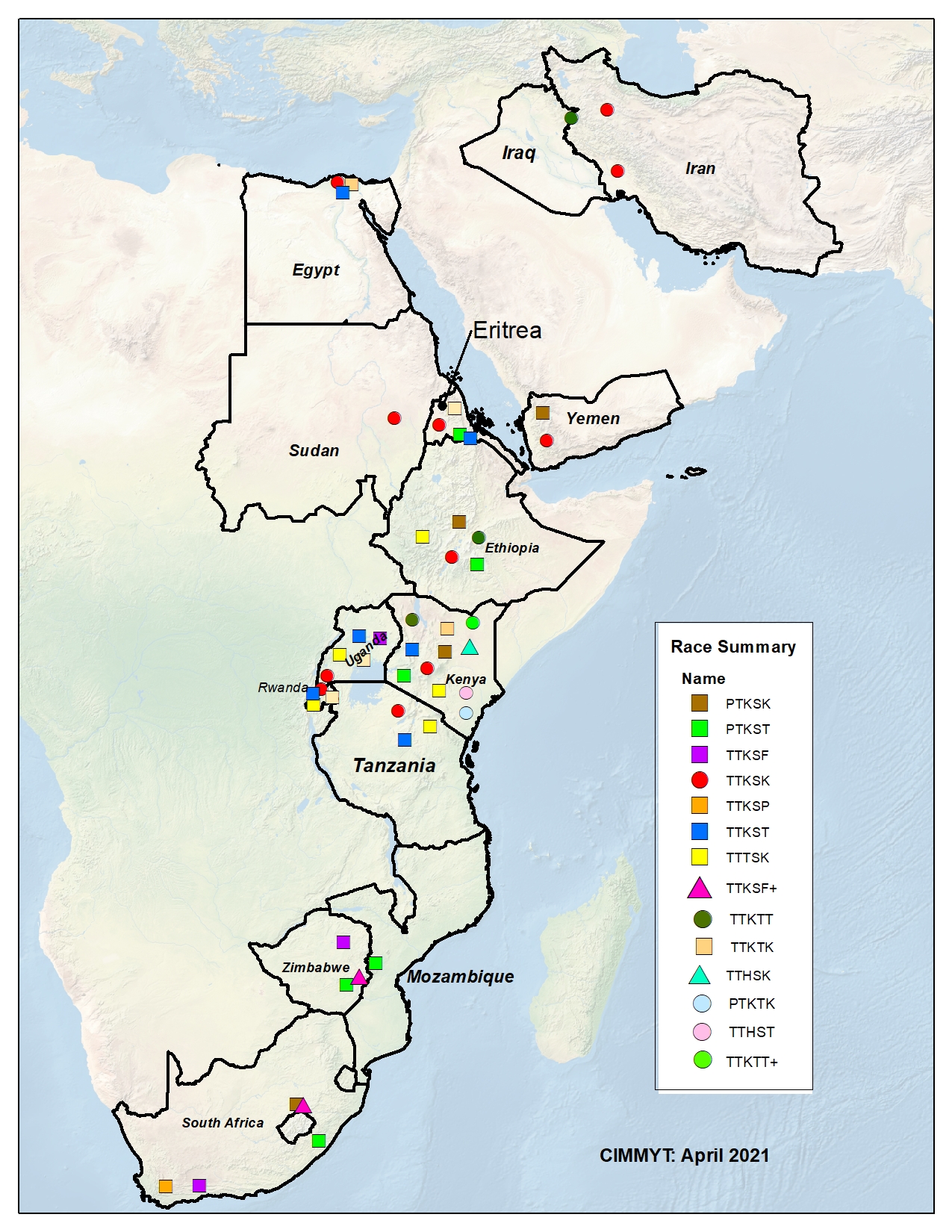